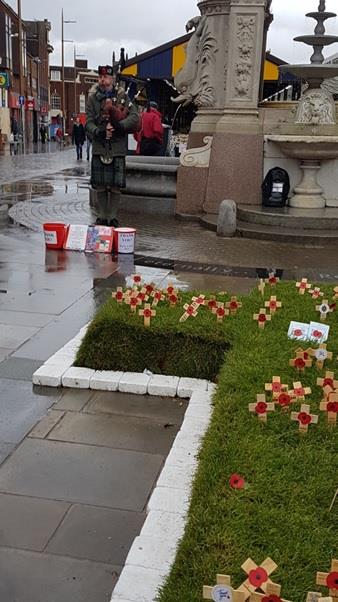 On Sunday the 11th November 2018, we remember and honour all the brave servicemen and women who have given their lives to protect and secure our nations freedom.  This day also falls on the 100th Anniversary of Armistice Day, which marks the day when the guns of Europe fell silent, and the First World War came to an end.

In memory of all the brave servicemen and women, who served in World War 1 and all subsequent conflicts, there will be a joint Armistice and Remembrance service taking place in Dudley. This will begin with a parade, which is made up of veterans, servicemen and women and local community groups. It will start from ‘Top Church’ on Vicar Street at around 10:15am, where it will move through Dudley High Street to finish at Coronation Gardens, where the Dudley Cenotaph is. From 10:40, the service will be lead by Reverend James Treasure, followed by a 2 minute silence at 11am and ending with the wreath laying ceremony.

There will also be a special tribute to commemorate the 100th year Anniversary of Armistice Day, where there will be clear silhouettes on empty chairs, to signify a mark of respect for all those who didn’t return home from the First World War. This is part of the ‘There but not there’ campaign, which is being honoured around the country.

It is important to note that before, during and after the Remembrance service, there will be several roads closed for the safety of all those involved. The roads that will be closed are as followed: Priory Road, Ednam Road, New Street, Tower Street, Priory Street, Stone Street, St James’s Road, Parsons Street, Market Place, High Street, Wolverhampton Street, Union Street and Vicar Street.

Edit this part using SiteBuilder in Site text and localization

You can register here!